I’ve broken down the assignment into parts to make it easier, but you’ll submit everything in a single Python script when you’re done. In my own solution I put a print() statement indicating each part, and I encourage you to do this same.

If you’re new to NumPy and matplotlib, remember: GIYF. There’s likely a good example on stackoverflow.com of how to do what you want to do, such as overlaying multiple plots. I will typically put a comment in my code with a link to the page that helped me in cases like this, and I encourage you to do the same. If you have any concerns about Honor System issues relating to this kind of coding, feel free to ask me.

Part 1: Roll your own

To get started, create a Python script called dotprod.py. This script should perform the following action. Each action should be preceded by a print statement to let the user know what’s going on.

Part 2: My name is NumPy, pronounced with an umPy …

Now we’re going to repeat what we did in Part 1, but this time with NumPy. So in your dotprod.py script add some code to do the following:

This part will be the most complicated, but will make use of things you already did in the first two parts. You’re going to compare the time taken by the two approaches (roll-your-own loop against numpy) for different sizes of very large arrays. 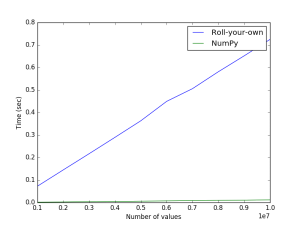 What to turn in to github

For this assignment, submit just your dotprod.py file. I am going to test this program as follows, from the command-line in a terminal window (I’m using % to indicate the command-line prompt):

If your program contains a syntax error or runtime error, you will get a zero on this assignment. So, if you’re smart, you’ll set aside an extra few minutes to download your sakai submissions as test them as above.